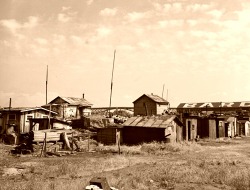 Notice the 'Bar' Sign
Many families in the Great Depression were too poor to afford housing. Some of them had gotten evicted, where even their family pictures were sold. They then moved to "Hoovervilles", areas of makeshift homes next to cities. The name "Hooverville" mocked the president, Herbert Hoover. The biggest Hooverville in Indiana, Curtisville, mocked the Vice President. Hoovervilles were made up of scraps, including old tires, cardboard boxes, newspapers, and flattened metal. It was anything anyone could find, making it often unsafe for living. Garbage cans were a very important part of homeless living, because you could cook on the bottom, flatten it to make part of a house, or even, in some cases, sleep inside of it.
There were several terms for commonly eaten food. One was a "Hoover Hog", a jackrabbit, a source of food used, when no other was available. There was also Mulligan Stew, where homeless people gathered together any food they could find, and made soup out of it for everyone. During the Great Depression, homeless living was a way of life. 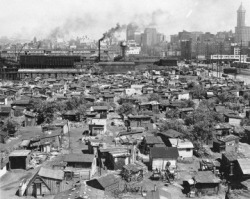